How fast do 50cc dirt bikes go? Have you ever asked yourself such a question? Actually, due to recent reviews taken by different 50cc dirt bike users, its test speed has been a trending topic of discussion. I have recently bought a 50cc dirt bike for my 8-year-old and had the chance to test its speed. What I discovered with the 50cc dirt bike is unlike any other dirt bike I have seen.

Here are some of the reasons why I like the 50cc dirt bike and how fast it can go compared to other dirt bikes. Trust me, this dirt bike is one of a kind.

What does 50cc mean?

What does 50cc mean? CC means cubic centimeters.  Motorcycles mostly measure the engine displacement using cubic centimeters. 50cc dirt bikes maximum speed usually ranges from 25 to 40 miles per hour. This speed is suitable for children who are less than ten years old. These bikes are specifically for the younger generations. Dirt bike riding has become a common recreational sport, which children can take part in. The 50cc Dirt bike has an adjustable speed setting meter that can be used to adjust the speed when the rider is riding.

The 50cc dirt bikes have been engineered to have a max speed ranging from 25mph to 40 mph. Many people might say that the speed is fast for young kids bur rarely do kids max out the speed of these dirt bikes. Most parents look at the speeds of these bikes for safety precautions. Most 50cc dirt bikes are fitted with an adjustable speed trigger that can allow your kid to ride the bike at a recommended speed to avoid accidents. The major advantage of these dirt bikes is you can teach your kid how to ride the bike easily. Its speed and durability give kids better skill in riding these bikes.

Safety precautions must be put in check for kids who want to ride these dirt bikes. You should make sure your child has a helmet on and padded gloves to protect his/her kneepads. You should also make sure that he has on protective gear clothing suitable for dirt bike riding. These requirements are a must if you don’t want your child badly injured or in some worse cases, hospitalized.

A 4-stroke engine system fitted into a dirt bike will make the bike attaining more speed ranging from 31-38mph. This makes it faster to attain speed than a 2 stroke fitted engine system. It takes a longer time to attain such speed but has more stability compared to the 4 stroke engine bike. These specifications determine how fast the dirt bike can move and its stability on the track.

Most manufacturers of these dirt bikes have made these specifications because they had a specific target in mind. This is why these dirt bikes are designed for children who are 10 years old and younger. Different designs have different speeds; make sure that you choose the right dirt bike for your kid. You must make a good review on its speed because that is the most important aspect concerning the safety of your child.

How to choose the Best 50cc Dirt Bike

Many factors come into play when you want to choose the best 50 cc Dirt bike in the market. You have to consider several things on your list. I have compiled a small list of features that I always use when it comes to choosing which dirt bike I want, especially in the 50cc class.

Here are some of the features that will help you choose the best electric dirt bike for kids.

Most 50cc bikes are usually durable and for a child who is under ten years old, and I am sure that you would want to have more kids who can use it. A good bike should have an efficient starter system with an on and off switch. The starter system is electrically suited with a kick-starter mechanism for easier ignition of the dirt bike. These features enhance the durability and easier handling of the dirt bike.

Most efficient 50cc dirt bikes are normally price high. Most of the 50cc dirt bikes almost have the same prices with a very small margin of difference. The big question is which one will suit your needs? I have a recommendation of certain dirt bikes I would recommend you to get for your kids. In this case, always look at the warranty, mechanical spare parts that are available in the market, and last but not list the price must fit the budget you have in mind.

Some people might say the 50cc power amp dirt bike might be too much power for the small kids, but don’t worry, this feature can be adjusted by simple adjustment accessories fitted into the dirt bikes for safety precautions.  Its engine can either be a 2-stroke engine or a four-stroke engine. These two types of engines have a difference, but in this case, I recommend you to take the one with a 4-stroke engine. This is because it makes acceleration smoother and easier to handle for kids. Read the dirt bikes manual to know how to adjust the settings for your child.

Different bikes have different speeds but which bike will suit your requirements. A 50cc dirt bike’s top speed is estimated to be around 40 to 50 mph. This speed may be high for your child, but no need to worry dirt bikes with this range of speed nowadays come with an adjustable speed throttle to control the speed of the bike for your child. The adjustable speed control is a safety precaution measure for kids who have not yet learned to ride a dirt bike well at a fast speed. For more information on how you can adjust the speed, please make sure you read the manual for further instructions.

Last but not least, the style of the dirt bike. Dirt bikes today have different colors and looks. It all depends on you. The seats for some bikes are shaped differently for more stability and comfort. The gauge speed meter and also handles for many 50cc come differently but somehow similar in shape and width. This is because of the weight it should support. There is a standard weight each bike should support to avoid wreckage in the future. All these styles and specifications make different bikes look spectacular. It’s upon you to decide which suits you the best.

Throughout my experience with dirt bikes, I have come to realize that there are specific bikes I would highly recommend when someone asked for my opinion.

These dirt bikes have the basic aspect a buyer always looks at when buying a commodity i.e., price, and durability. Make sure you buy from best dirt bike manufacturer for kids like the following:

This bike was designed to perfection when it comes to comfort and style. It is so comfortable to ride, and its features are top-notch. For its size, the bike is really fast, clocking a speed of 33-37mph, making it one of the fastest bikes in the market in its category of 50cc. The bike is fitted with, and automatic clutch system in the middle and has only one gear. This feature makes it super easy for 5-10 years to learn and ride. Its awesome radiator cooling system makes the dirt bike accelerate with little sound. This is an amazing feature made by the company to make the 50cc dirt bike emit less noise. Did I mention this is the fastest bike in the market? What an amazing bike!

This dirt bike has been rated to be one of the fastest bikes clocking a top speed of 30-37 miles per hour. It is a beast of nature in this category because there is no bike like it in the market when it comes to clocking top speed. It’s market price is reasonable for most buyers. It has the kill switch feature, which can be used to switch the bike off and drain its power. The only disadvantage with the kill switch is if you accidentally switch it off using the kill switch, the next time you will want to use the dirt bike, the battery will have died, and you will have to take it for a recharge.

The Honda brand has a unique 50cc dirt bike, on the other hand. This bike has the kick start mechanism making it preferable to older kids who have passed the age of 10. This bike has no age limit, but its size will limit whoever is riding it because it is specifically made for children.

For some kids, they may find it a bit difficult to use the kick-start system, but don’t worry, you can use your key for ignition of the bike. The bike’s speed ranges run 25mph to about 33 mph. This is relatively low compared to the other bikes, but the Honda CRF50 was designed for stability. 4 stroke system, three gears, no clutch system; these are some of its unique features the Honda has to offer. Remember to read the manual for more exciting features.

The Suzuki comes with an electric and kick-start system uniquely designed for it. It’s built-in a lightweight structure making it faster in terms of riding at high speeds. Its features are kind of similar to the Yamaha TTR-50. The only difference comes with the suspension system fitted in the Suzuki has a very strong set of springs fitted for sustainability when riding under rocky or rough terrains.

This sister bike from the Yamaha brand has similar features with the Yamaha TTR-50. The only difference comes with engine design. While the PW-50 is set with a 2 stroke engine system, the TTR-50 comes with a 4 stroke engine system. This bike has a top speed clocking between 25-30mph. I highly recommend this bike to kids aged 3 to 5 years. It will be a suitable fit for them.

Dirt riding is becoming a popular sport in the world today. I urge you to consider getting your child one of the super 50cc dirt bikes I have mentioned above. So far, I have two bikes for my two kids who love dirt riding. This is a way also to know what your children are good at. What a fun way to spend time with your children.

After reading my review on dirt bikes, you will come to understand why it’s so amazing to have one. Always read the manuals before using the bikes, and for more information, don’t be shy to ask. Remember, knowledge is power!! 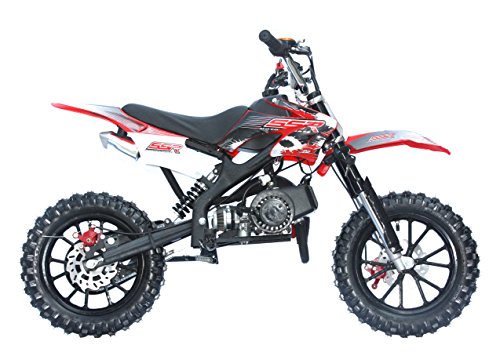